We’ve got a cover and release date for COLD DARK PLACES. What do you think? 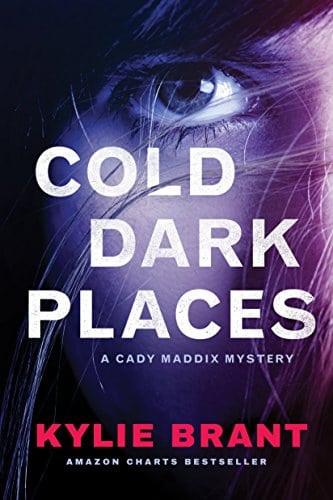 The first in the Cady Maddix series will be released Dec. 4. It’s available for pre-order. Here’s the back cover copy:

Cady Maddix survived a brutal upbringing—emotionally scarred but hardened—with a will for self-preservation. Hunting fugitives has given her life purpose and control. But when the Deputy US Marshal returns home to care for her Alzheimer’s-stricken mother, a new case stirs old memories.

Child killer Samuel Aldeen has broken out of a nearby facility for the criminally insane, and the authorities believe he was aided by accomplices, both inside and out. Enlisted to track him down, Cady follows an unexpected lead. Her name is Eryn Pullman, a young woman recently released from a neighboring psychiatric facility, a mentally fragile survivor of childhood abuse, and Aldeen’s next designated victim.

To save Eryn’s life, Cady must work fast to uncover the unimaginable link between predator and prey—even as it pulls her into the cold dark places of her own past.

I’m already working on Book 2, DOWN THE DARKEST ROAD.

In my spare time, I’m finishing up re-edits on SECRETS OF THE DEAD and then I’ll move on to the re-formatting phase for WAKING EVIL, WAKING THE DEAD, DEADLY INTENT, DEADLY DREAMS and DEADLY SINS. Aaaaand then I have a slew of Silhouettes to re-format…my list of things to do is endless!

The summer flew by, filled with medical crises, a new baby, a few trips and the kitchen remodel project from hell. Hoping the fall offers plenty of writing time and the opportunity to catch up!