Yes, I know. Someone with a looming deadline who still has several RITA entries to judge and eight re-issued books to format and upload has no business taking time off to read. But I did. Call it a brain break. I need to recharge to keep up these ten-twelve hour work days. 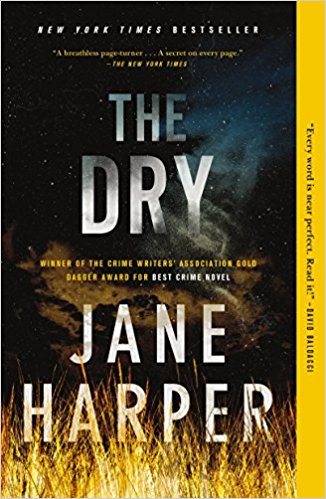 The book I recently finished is Jane Harper’s The Dry. It’s a highly lauded debut that was released last month to rave reviews and it was a solid four stars for me.

I especially liked the main character, Aaron Falk, who returns to his hometown for his childhood friend’s funeral. The town doesn’t hold especially good memories for him, and the old mystery that drove his father and him from their farm is as riveting as is the brutal murder that took his old friend. Falk is a cop, now working in financial crimes, and he is pressured to stay and help get to the root of the murders.

The title is derived from the setting. The story takes place in Australia, and the small community is under pressure from the two-year drought and the unrelenting heat. I have a soft spot for books where the setting is as much a character as the story people, and that is certainly true here. And when that setting factors into the ending, as well, it’s a nice little loop for me.

The characters are all interesting, and the murders gruesome. (Aaron’s friend is widely thought to have killed his family and then himself). Because of the unresolved murder that drove Aaron and his father from town, he’s not entirely welcomed by all of the townspeople.

I was also a fan of the story structure, where people say one thing but unspoken revelations are revealed through flashbacks. The execution of the story was very nearly perfect.

A couple of minor quibbles kept it from being a five-star read for me. The reveal of the decades old murder that drove Aaron from town came from the dead girl herself. That didn’t entirely work for me and I think it would have been more effective had it been ‘solved’ on the page. The other thing that I didn’t like was that the solution to the current multiple murders rested on a scrap of paper Aaron found and an offhand comment from a secondary character about one of the townspeople. It didn’t feel like a particularly heroic solve, although Falk more than played the hero in the action-packed final scene with the murderer.

All in all, I recommend the book. I enjoyed Harper’s writing style and loved the peek into the unfamiliar setting. The sequel to this book, Force of Nature, features Aaron Falk again, and I enjoyed him enough to want to read more.

How about you? Anyone read a good book lately?